KAROLINA ASZYK A graduate of the Faculty of Painting and Graphics of the Academy of Fine Arts in Gdansk, received her doctorate at the Academy of Fine Arts in Krakow, a University lecturer in the Department of Journalism and Media at the University of Gdansk BETWEEN A set of photographs "Between" is based on the assumption that the sense of many meanings is hidden on the border between the spoken and the unspoken, the possible to illustrate and the impossible. The basic formal means of the set, the inversion of the positive, can serve to show the opposite of the positive, not so much in terms of its denial but to reveal the reality from the other side, inaccessible to sensory cognition. Looking from the perspective of form, the relation between light and darkness seems to show up, paradoxically, in an intensive way when the laws of our habits are suspended. This happens, for example, when in the sections of the image where you would normally expect to see bright tones, there are their negative equivalents...

ZBIGNIEW TREPPA Professor at the University of Gdansk, Head of the Department of Image Anthropology. He has been engaged in image analysis for several years. THE GATE The initiated project "The Gate" anticipates the realization of large-scale spatial installations, which in the area of the gallery are presented in the form of models of these installations. The intention for creating installation-gates is an invitation to enter the area of mystery. This is the first public presentation of the project. The photograms presented in the traditional manner reflect the way of searching for the form of the meanings encoded in the sign matter of the set. Viewed from the perspective of structure, the works are a combination of two techniques: multiple exposures of the negative and the photogram, which is the method of creating an image on the photographic paper in the positive darkroom.

Views from the gallery. 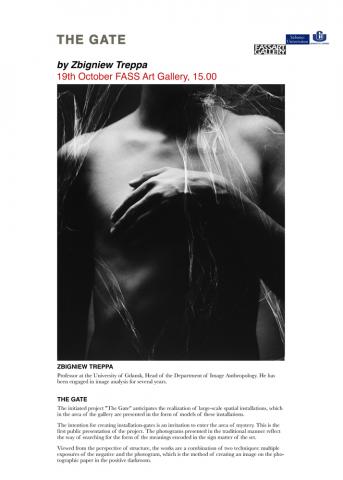