Euroarabia is a project by Julia Curyło and Liza Sherzai presented in public space. Sherzai, currently living in Warsaw, has Afghan roots, while Curyło's family was relocated to the central Poland from Kresy, a part of modern-day Belarus.  The motif of migration is therefore deeply integrated into the project for personal and cultural reasons alongside the simulation of contrasts between Arabic and European worlds, their history, tradition and religions. These themes accompany the main subject matter – the women's affairs, their rights, place and role throughout history and in the contemporary world.

The title of the installation – Euroarabia – was inspired by the writings of Oriana Fallaci, who widely commented on the problem of Islamization of Europe and the political concept of “Eurabia”. The first step in that direction was the painting by  Curyło titled “Euroarabia”, the concept of which turned into an installation consisting of fifteen big format polyurethane sculptures that measure 20cm in height and 130cm in circumference and are filled with air.  Curyło used the same material in her earlier instillation “Chicks” presented, among other places, in Warsaw, Wroclaw and New York. Inflated objects often appear in her paintings as well as subsequent installations in the urban space. Hovering or pinned to the ground, they are simultaneously transient, ephemeral, and weighed down by their materiality. Just like the women-matryoshki are weighed down by black burqas.  Only the shinning eyes express determination, desire to act and resistance to the matter pressing in from every side.  Each matryoshka stands on a woven wreath, the attribute traditionally associated with Eastern Europe and alluding to Curyło's roots in the context of  Sherzai's Arabic heritage. Black burqas are covered with words in Persian and English, which seen from afar form delicate patterns. Viewed up close, they surprise with their fierceness and simplicity – freedom, human rights, women's rights, equality. 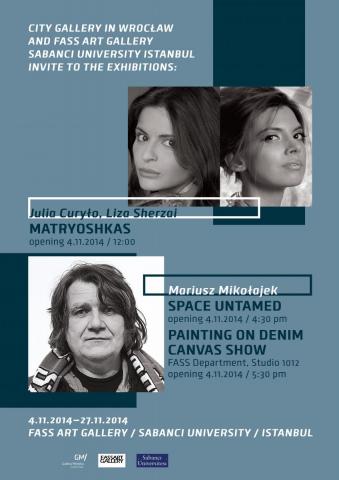