The figure, according to the Houaiss dictionary, is a feminine noun. The exterior form, external outlines of a body, graphic lines which represent someone or something (real or imaginary), images which accompany a text, envisioned forms, a symbol, an allegory, an idea.

The figure accompanies the artistic trajectory of Luciana Arslan. Dense forms, engraves, material, composed of insistent lines, sometimes, even 'dirty'. Graphic notes derived from thought processes and the molding of sensations in forms, rude embroidery on light fabric. Above all, the drawings are made up of images and vast 'empty' spaces on the fragile Japanese paper, or fulfilled with paint and arranged upon wooden fiber plates.

The hybridism of the images is striking. There is empathy and taste for certain disconnected imaginary imagery: educational books, aimed at women, Turkish prints and filigrees, anatomical diagrams and the suitable movement of bodies for dancing. The fantastic, emerges in a natural way, as if due to the state of the soul in a trance, or an emotional, uncontrollable and continuous overflow.

At times, inevitable affinities come to mind: Leonilson, Frida Kahlo, Louise Borgeois, and David Salle. That is natural for a cosmopolitan artist. Strong references which helped to build original repertoires and paradigms that intertwine in a contemporary rhizome and composes layers of significant available and shuffled texts. It is difficult to say whether a code can possibly be identified or if we are dealing with the incommunicable and incomprehensible.

What does Luciana wish to tell us? Would there be a strand of logical discourse which would give us a hint of what her intentions were? Would it be enough to reason about the complex condition of a woman and her vital relations? We are facing a paradox between ancestral culture and the post-modern cliché.

More than just making a statement, it is necessary to incite upon perception. After all, we ought to dip the image into the liquidity of reality, even though the one and only experience stems from the idea, the known, and the memory. The dirtiness is crucial, because it demonstrates that utopia is impossible. The silence, the emptiness and the blank do not exist. But there is focus, the timbre and the form.

Summing up, there is a net of lines, which bind the bodies, the entrails and the figures. The flow may well be the key: the smudge which spreads and devours everything in its surroundings. The arabesque and the spiral of the ornament are hooks to trap, as well as the fur, hair and skeins. But the vomit, blood, viscose and sticky excretes, although in a repulsive state, portray their share of seduction.

In this entanglement, the significance can only be synthesized. There ought to be no diachronic or linear readings, nor should any pre-judgments be made. Rather contemplation and enjoyment and let the figures prevail. 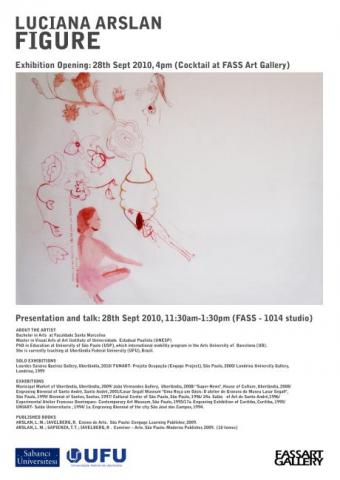