Italian gardens have been described as “perfect things of imagination”.

While the fourteenth century Italian poet Petrarch was the first person to envisage the garden as the perfect setting for the poet and the man of letters, it was the writings of Vitruvius, Varro an Pliny that provided designers with the sources for early Renaissance garden design.  Since the eighteenth century, artist from England and Europe have been drawn to visit these gardens. Many made detailed drawings in their sketchbooks of famous sites such as Villa Madama and Villa d'Este, as well as producing exquisitely detailed engravings of them. More recently, American, Canadian, Australian and New Zealand artists have followed this practice, attracted to Italy by the legacy of Renaissance art and culture.In 1973, for example, Cantebury painter Bill Sutton spent his sabbatical  leave in Italy drawing classical ruins and sketching in Renaissance gardens. His lovely drawing of wild flowers from the Boboli Gardens at Florence was included in a recent exhibition at the Christchurch Art Gallery: W.A. Sutton: Watercolours of Italy.

Cathryn Shine was following in the footsteps of a long line of artists when she visited Italy in 2005. Giardini e Giardinieri in Italia is the fourth body of Italianate work that Shine, a fluent speaker of Italian, has produced and exhibited both nationally and internationally. Her Panoramas from Italy (1991) series of photographic prints focused on wide-angle views of buildings, statuary and gardens. In her later, more intamte, images of the Sotto Un Cielo Avorio (2006) suite she introduced the viewer to the visual intrigues of Italian gardens, archaeological sites and townscapes. Both bodies of work are linked by her love of Italy and her passion for photography and printmaking. In Giardini e Giardinieri in Italia, Shine explores the origins of cultivated gardens and investigates the ways in which plants grown in contemporary Renaissance-style gardens have been preserved, propagated and maintained over a period of nearly six hundred years, despite wars, plagues and natural disasters. She has interviewed curators and gardeners and photographed them at their place of work.

Shine has long been fascinated by the medicinal and spiritual aspects of medieval gardens and regards the monks of this era as the original advocates for sustainability. It was they who classified the seeds and plants they gathered, planting and growing them in the same way season by season, year by year, carefully drawing and painting them in exquisite detail in Herbals which were copied and recopied in scriptoria across Europe and used as medicinal reference books. Interested in the development of cultivated gardens in Renaissance Italy and strong supporter of sustainability, Shine planned her journey in 2005 around educational institutions –universities which archival plant collections and rare plants at Rome, Florence and Naples, as well as orto botanico – places where plants are grown for scientific study and displayed to the public. She visited the botanical garden at Padua, established in 1545, one of the oldest of its type in the world. It was originally attached to the School of Botany at the University of Padua, where the first chair of that science had been created shortly before .She researched in similar gardens at Pisa, Ferrara, Lucca, Urbino, Perugia, Verona, Firenze, Roma,Siena,Camerino, Napoli, Viterbo, Toscolano Moderno, Frascati, Lecce, Como, Milano and on the islands of Largo di Maggiore. Shine regards the early creators of these botanical gardens as “incredible visionaries” , men who had seen the need for a stable collection of plants to refer to.

Although Italian Renaissance gardens are characterized by the balance and symmetry of their design, their planting plans have never been static. Most were, and still are immense pleasure gardens and were adapted over time to reflect contemporary trends and taste. Flowers, for example, were particularly popular in Italian Renaissance gardens during the seventeenth century when there was a new fashion for crystallizing them. Stillrooms became a feature in every large house and were used to distil essences of lemon, bitter orange and citron flowers. These were used to flavor sorbets and soft drinks.  Flowers were also necessary for sustaining the contemporary fashion of perfuming gloves. They were scented with jasmine, rose and ambergris and the demand for them led to an extensive cultivation of these particular plants and flowers at this time.

While all the contemporary Italian gardens Shine visited and photographed, both public and private, have changed over time, they all retain the balance and contrast that have always been central to Renaissance garden design. According to Georgina Masson, the Villa d’Estte remains the most typically Renaissance garden in Italy in that every inch of its highly integrated design has been subjected to “...man-made order and symmetry” . By comparison, the garden at the Villa Aldobrindini at Frascati, although it remains Italian Renaissance in its overall design, has been planted out more freely than the gardens at Villa d’Este . Even the gardens at Isola Even the garden at Isola Bella , that recreational masterpiece whose gardens originally took forty years to create, are more freely planted today.

Giardini e Giardineri in Itali is as much about the gardeners, whose care has preserved this wonderful heritage, as it is about the gardens. It is they who guard and protect them and their vulnerable plant collections for posterity. No extant records of the original gardener exist, but Shine interviewed and recorded the responses of over 60 contemporary gardeners, collecting significant data about their lives and work as well as valuable information pertaining to the evolution of the plant collections in their care. She also made observational and reportage type photographs of their work environment, each gardener photographed in the favourite section of his, or her, garden. Without exception, these remarkable men and women regarded their work of caring for the plants, preserving the purity of each strain and maintaining the gardens, as a vocation. Many had worked in the same garden all their lives. Shine encountered the same love and dedication in the smaller private gardens she visited. For example, Signore Selina Bonelli Zondari, the owner of the  Villa Vico Bello in the back hills of Sienna, regarded the costly work of creating a new Renaissance garden as both serious work and labour of love.

Shine’s installation, Giardini e Giardineri in Itali, should be regarded as a work in progress. While her photographic images “breathe enchantment”, she regards them as a catalyst, a stimulus for undertaking further work: interviewing and recording the names, lives, work and unique perceptions of today’s gardeners, the contemporary guardians of Italian Renaissance gardens and extending the images into new art works. 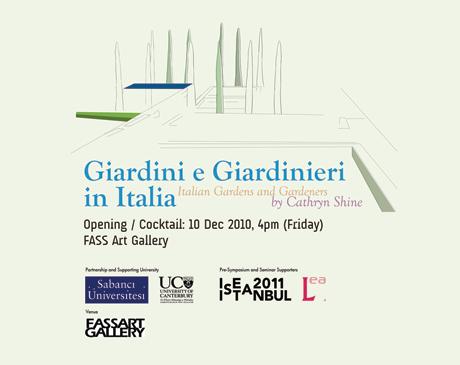