Insurgency and sanctions: Do sanctions against state sponsors of insurgency work?

Do economic sanctions against state sponsors of insurgent groups reduce violence? Although sanctions often aim to force countries like Iran to end their support for non-state armed groups, policymakers continue to debate the effectiveness of this tactic and there are few systematic studies on the topic. In this paper we address this gap using the bargaining framework and newly available datasets on economic sanctions, state sponsors of rebels, and civil conflict covering the years 1989-2018. We argue that, in general, sanctions will reduce the level of violence by reducing the resources insurgents receive from their foreign sponsors. However, this effect should be weaker if insurgents have alternative income sources (such as contraband). We also expect sanctioned sponsor states to prioritize proxy groups that are strategically more important or culturally similar to the sponsor. Our empirical findings support three of our four hypotheses. Sanctions against a group’s foreign sponsors are associated with less violence, but this pacifying effect is weaker if insurgents have access to contraband funds or they are fighting a country imposing sanctions on their sponsor. However, contrary to our expectations, groups that share a sponsor’s religion are affected more strongly when their sponsor is under sanctions. These results improve our understanding of sanctions as a counter-insurgency tool by highlighting their limits, especially for the countries imposing the sanctions. 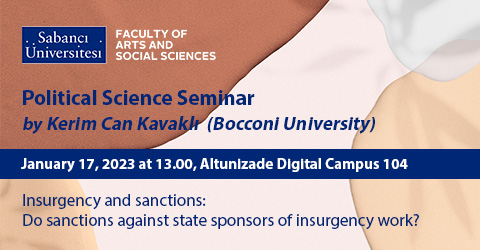